I’m Laura – a busy mom of three making healthy, easy meals in my little kitchen. Want delicious recipes for you and your family? Stick around a while!
Read More ⟶ 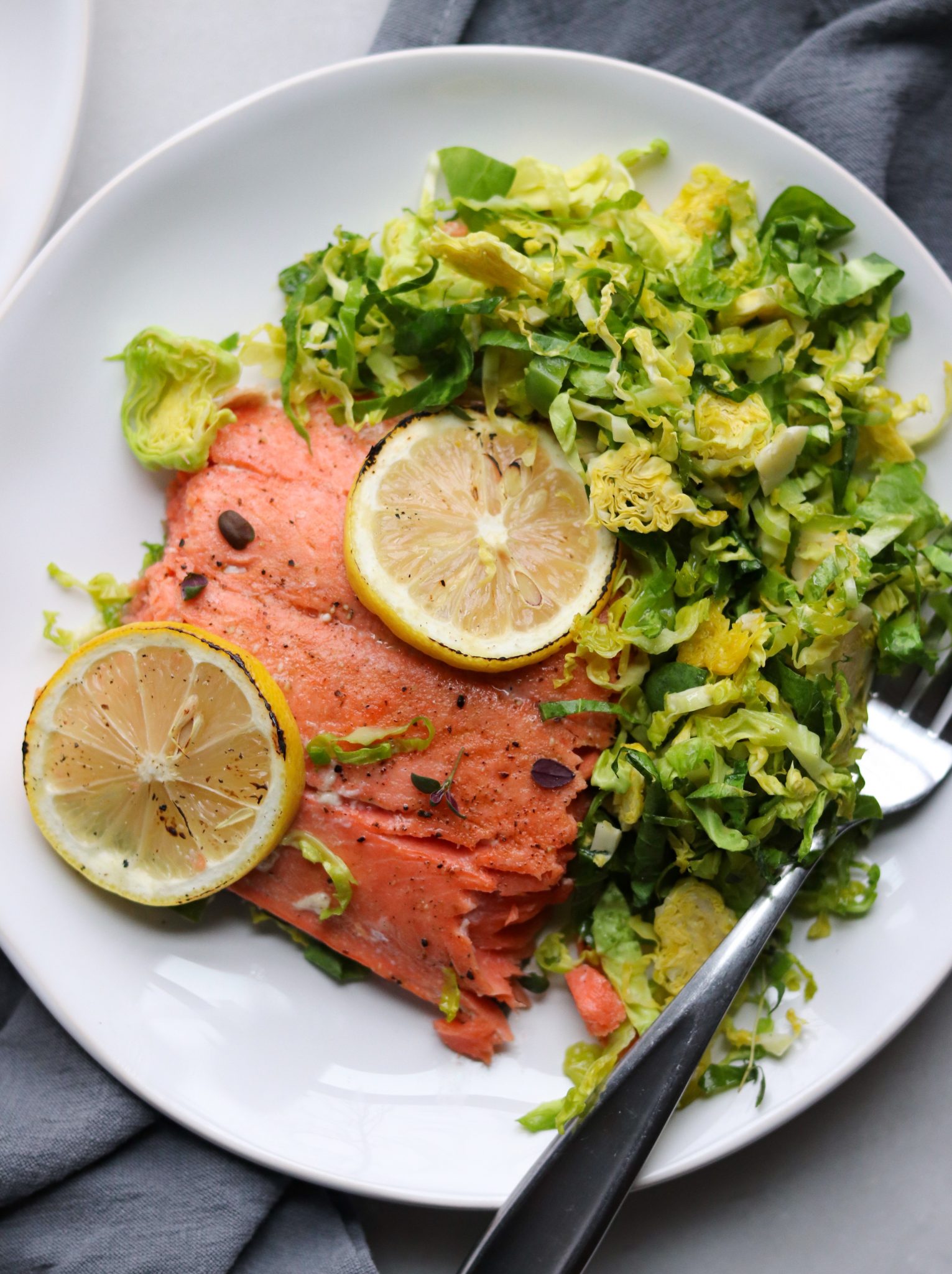 Whole30 & Low Carb Sheetpan Salmon and Brussels Sprouts Salad –it’s what’s for dinner! Gently roast a whole salmon side with lemon and olive oil, and pair it with a lovely Wilted Brussels Sprouts Salad. The best part? It’s all cooked on ONE sheet pan. This recipe is equally perfect for busy weeknights and entertaining friends, because it’s SO simple and totally impressive!

One thing I’ve learned since I had kids: Simplify.

Lemme say it a little louder. SIMPLIFY. Honestly and truly, I wish I could go back in time five or six years and shake some sense into my past self.

No, Laura, not every meal needs to be gourmet. It’s okay to buy pre-washed and cut lettuce and a rotisserie chicken. Your kale doesn’t need to be hand-massaged. Your eggs don’t need to be freshly poached. Sure, cooking at home is awesome! But you know what? Studies show it is one hundred million percent okay to do things in an easier way. See? Science!

It took me a few years, but once I wrapped my mind around that concept, I actually kind of ran with it. Challenge officially accepted. How simple could I make things, really?

Well, this Sheetpan Roasted Salmon with Wilted Brussels Sprouts Salad is made with FOUR ingredients.

Six, if you count salt and pepper. It looks a lot fancier than that, doesn’t it?

One of the things I love about cooking with salmon sides is how absolutely beautiful they look when you serve them. I promise you, you will definitely appear to be a seasoned cook when you serve a meal like this. Just because of the way it looks! And ya know what? It’s actually cheaper to buy a side than it is to buy individual portions!

A few minutes under the broil first will gently sear the flesh, then bring the temperature of your oven way down to finish cooking through. The sear helps to keep the albumin at bay (that’s the white stuff that leaks out), which I should mention is totally fine to eat. It’s more of an aesthetic thing, so don’t sweat it if you see some.

This is the way I cook one of my other popular and healthy recipes, too, like Bruschetta Salmon. It’s my absolute favorite method to prepare a salmon side.

For both salmon recipes, the cook time will vary depending on the thickness of your fish and the strength of your broiler, so you’ll want to stay close and keep an eye on it, but it’s easy to get the hang of once you know how strong your broiler is!

This Whole30 salmon and brussels sprouts recipe doesn’t totally roast the brussels sprouts. It lightly wilts them for just a few minutes in low heat. They’re shredded into tiny pieces so it doesn’t take too long to get them to the point that they’re just turning a beautiful bright green in color, lightly cooked, but still holding a crunchy texture. It eats as a salad, and it’s unbelievably simple, with so much texture and flavor.. it’s absolutely perfect!

If you’ve got fish on the mind, check out some of my other healthy seafood recipes:

Do you want to know why making this one pan salmon and brussels sprouts recipe made me laugh? Read my Instagram post about it, and while you’re there, I’d love if you gave my page a follow!

Open
It just tastes better when someone else made it, t